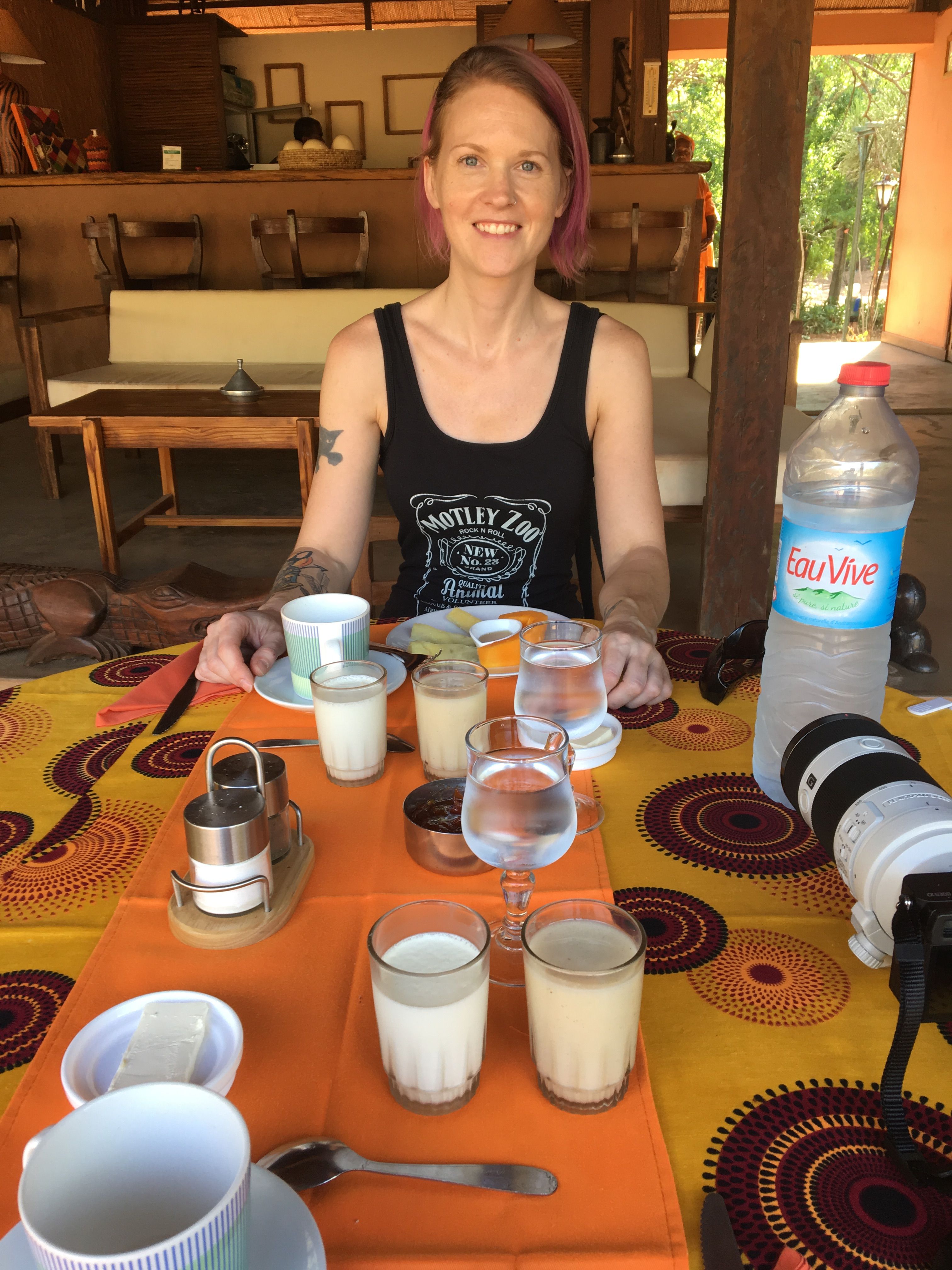 Lambert was really a funny guy and he loves speaking English. He said he wakes up at 4am and listens to music for a few minutes then (on his phone), studies a British English lesson- every day. He asked us a lot of different words and had me write many down- as well as I asked him to do the same.

Before coming here, I though French was just what the country spoke, but I realized that’s because of the colonization of the French and not because they want it this way- or because they like it. The native people speak Malagasy- and I would prefer to learn that instead.

I am a pretty quick study with language, but there are a lot of little tricks and intonations that can be hard to get. For example, thank you= misaotra, but here is pronounced mee-sow-tsa. There’s no r at all and the a o is more like ow than aye-o.

Lambert and François liked that I was so interested in learning it and especially too that I was a jokester myself. Lambert kept saying how fun we were- how much he liked us…I know we’re cool but I guess a lot of the other guests don’t want to do as much as us (but who pays to go all the way to Madagascar to sit around??) and certainly don’t take such an interested in the culture or language as we do. You can tell how proud Lambert is of the culture, he really enjoys sharing anything he can.

He told us his Malagasy name is Dimilayhe (dim-ee-lah-hee) which means 5 man because he’s the 5th male in his family. His brother is actually a back up dancer for a famous singer and they live in Tana (Antananarivo). He told us that the porters and hotel employees think I am a pop singer like Rihanna and Bryan is a soccer player like Beckham- but that he thinks of Bryan as a back up dancer too like his brother. We said we’d take those honors as long as no one asked us to sing or play soccer- and no one should see Bryan dance 😉

On the way to the walk in a new forest, we went by a zebu drawn cart- a small one with just room for 2 people and some supplies. Lambert told us that this cart is called literally “sorry parents in law, no room for you” because the man got tired of carrying his in laws around too and wanted a cart for just him and his wife!

We got to see giant baobab (bah-ow-bahb) tress, which are a very unusual and strange species found here and some in Africa. They are absolutely huge and they are thousands of years old. We got out to see one and a family who lived nearby (in the traditional wood hut) came down the road to see us- the vizahdy (white people). The children giggled and smiled and I said “Inana ko be kilohte” (my name is big boss), and then I stuck my arm out and made a muscle with my bicep. This sent the children into hysterics- really, the adults too. I asked them their names, but couldn’t really understand them, as they were more unusual French names. They kept pointing and giggling and talking about our tattoos. I learned how to say dog and cat, “aliaka (ah-leek-ah) and “piso” (pee-su), so I pointed to them on my arm and they laughed again. I wish we could have spent more time with them, but we took a couple pictures and I told them in Malagasy they were my new friends. 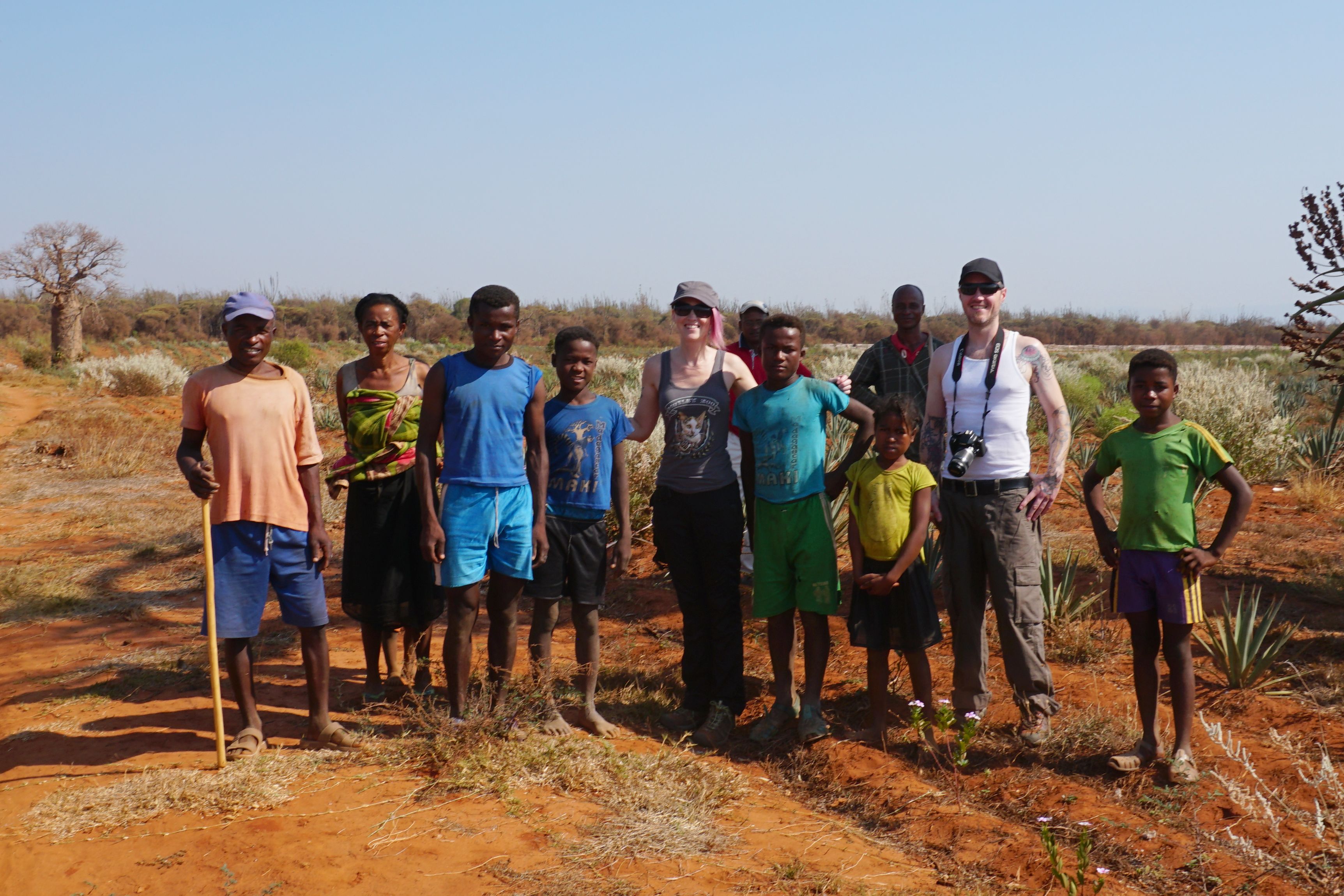 One of the other big jokes between Lambert, François and the two of us was calling each other “lazy”. I asked if there even was a word for this in Malagasy because clearly everyone works SO hard for everything…life is so hard. They said it was “kamo” (kah-moo) and so Lambert really wanted me to call Francois lazy man each morning. They’d both laugh so hard and that of course made us laugh too. We went to a different part of the spiny forest- where there’s a quick transition back into the more deciduous, greener one which I cannot recall the name of). Pretty much from one side of the path to the other it was definitive. However at this point, I was not feeling super great- again exhaustion and the heat- and so we didn’t walk very far before going back home to nap. 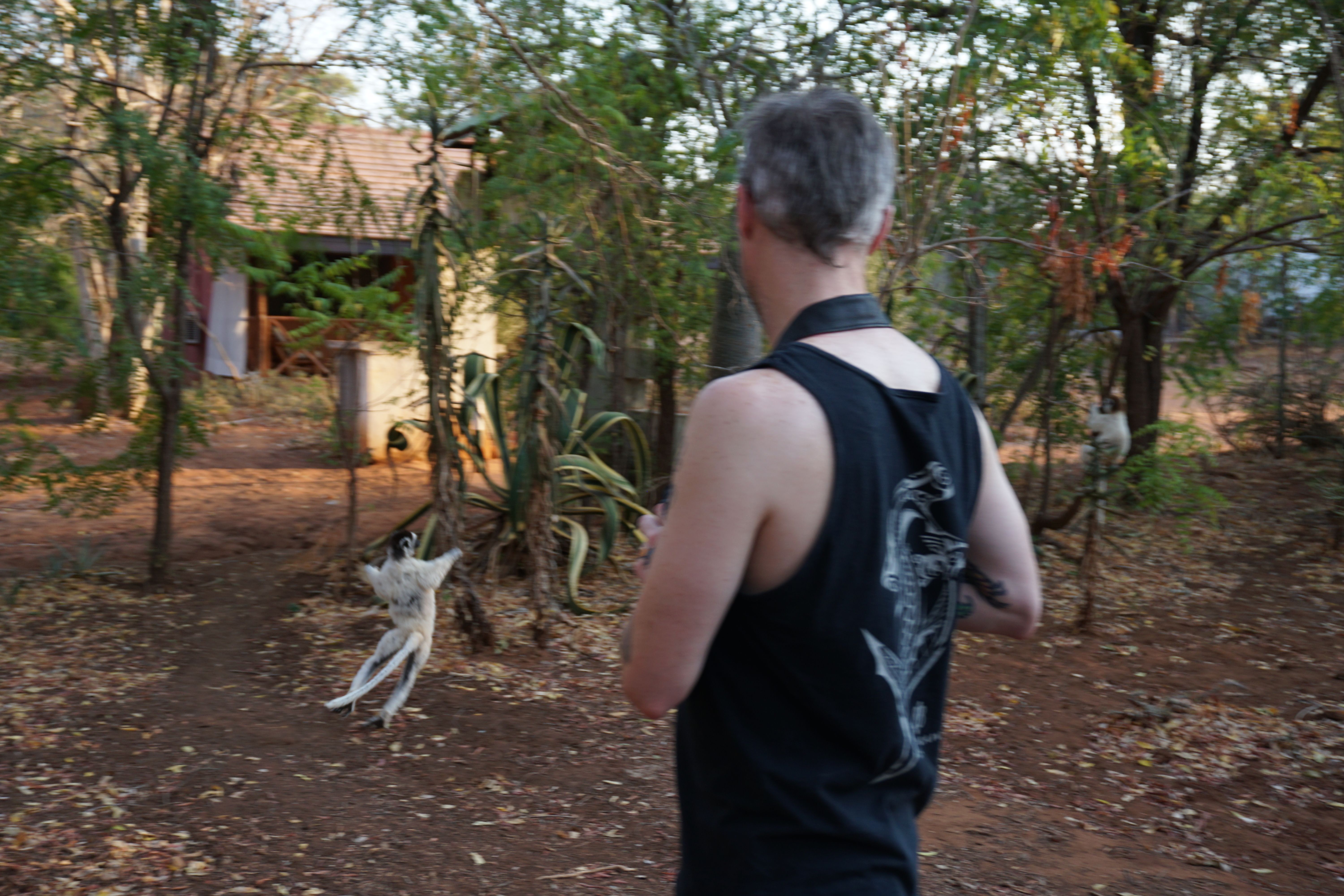 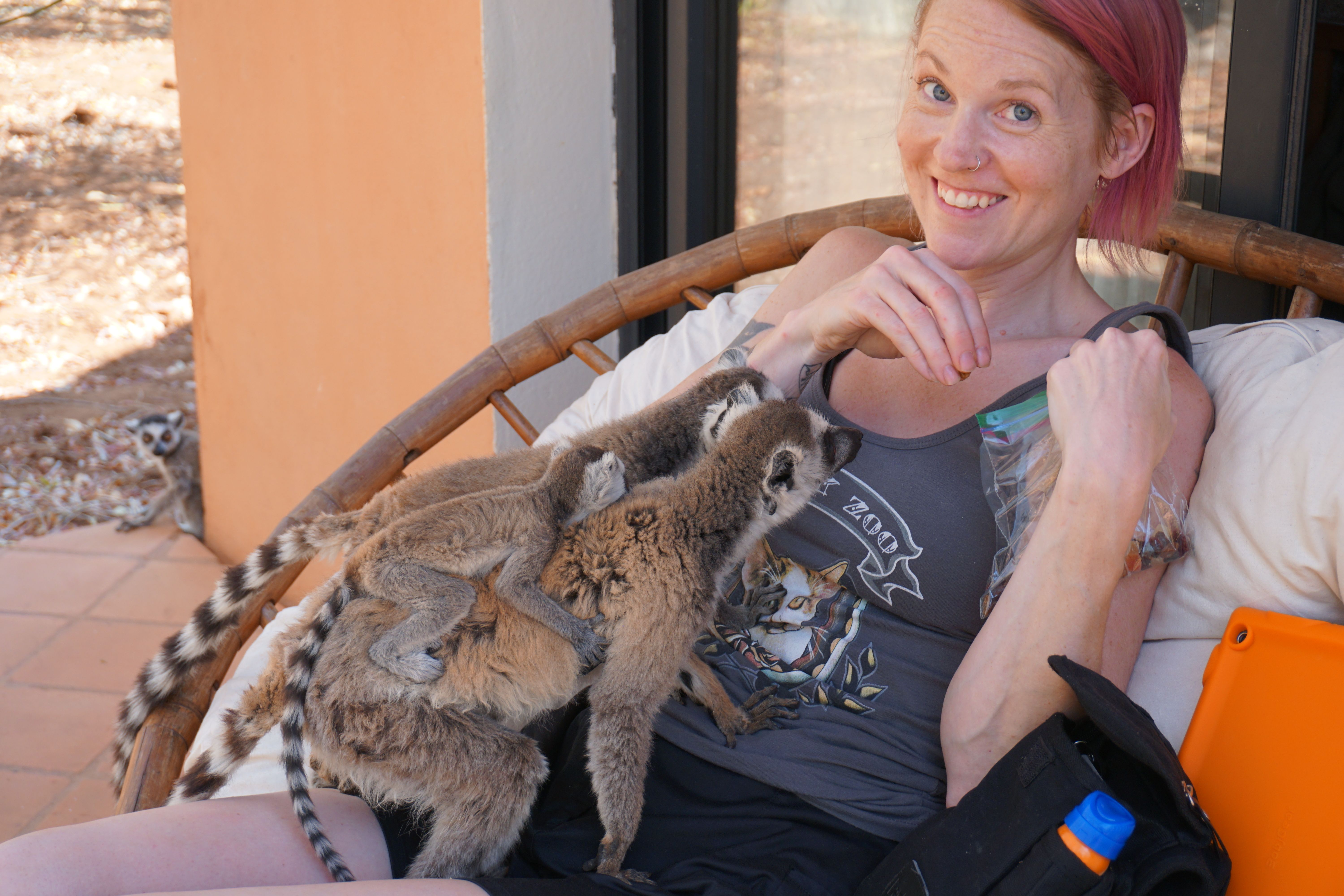 When we got back to our bungalow, not only were sifaka around but the ringtails too. The sifaka shortly after danced off, but the ring tails knew there would be treats…and this time I had a banana too! OMG they really liked this and all were clamoring in my lap and trying to take it all from me. There were little skirmishes over bits and pieces, but one very brave teenage female, was very persistent. She kept getting up very close to me- at one point, even touching her nose to mine! At first, sadly we realize that the card was not in the camera and we missed what we’d later refer to as “the banana incident”- but we finally figured this out and were able to capture more moments with the dried fruit. Some brown lemurs came over as well to join the party- now THREE species of lemurs joining us on the patio in one day, seriously?! These ones are a bit more aloof- they stay further away and up in the trees, but you can hear them because they grunt at each other. It sounds like little piggies and it’s pretty cute.

We spent a long time with them, almost until dinner. During which I learned to perfect the ringtail call, so I could try and lure them later as well 😉 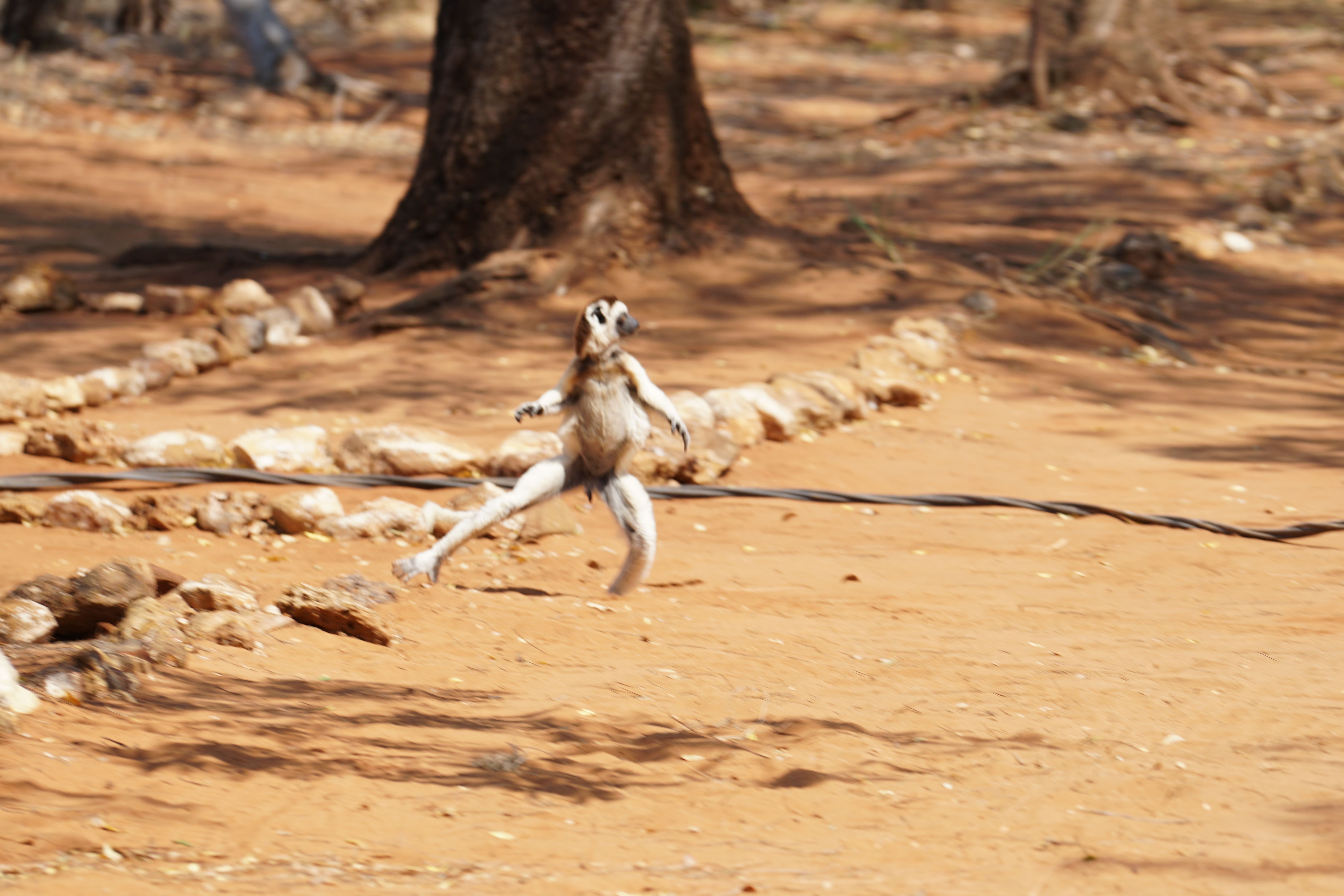 Just before dinner tonight and even the night before (which I had forgotten to add in), we went looking for the lemurs before they went to the forest to sleep. For the ringtails this was strolling along as a family, down the road, like cats with their tails in the air. For the sifaka, this was the dance. I had included pictures and somewhat mentioned this, but not enough can be said about how freaking funny it is that this is how they choose to get around!

There are a few troupes of sifakas around and each night when they are finished eating for the day, one will come down to the ground and jump a few feet with on foot in front, then switch ways and do the other- with their arms up in the air. It is SO funny to wacth and had us cracking up every time- this is Bryan’s fav kind of lemur.

Tonight we came upon a troupe and one had a baby! The only thing we had yet to witness that would top everything would be a baby sifaka dancing. We waited and watched for quite a while as he or she tested out the trees, jumping back and forth as the parents ate. This is so painfully cute as well, and you can go on watching forever…we did for so long we could barely move, our butts were so sore. Alas no baby dancing sifaka, but still totally rewarding and enjoyable nonetheless. We cannot complain one bit about the experiences we had because more than we ever imagined possible happened during those short 2 ½ days. We also stopped to see the museum that had been built on the property in 1995, celebrating the heritage of the Antanroy people. We learned about why the guide the first day at the spiny forest had a spear- because it was given to him at his coming of age ceremony at 15. We saw a replica of their houses, which was interesting because while we could see the outsides and that they were not very big even for 5-6 people, they are ridiculously inadequate for what you could really conceive of people living in nowadays. 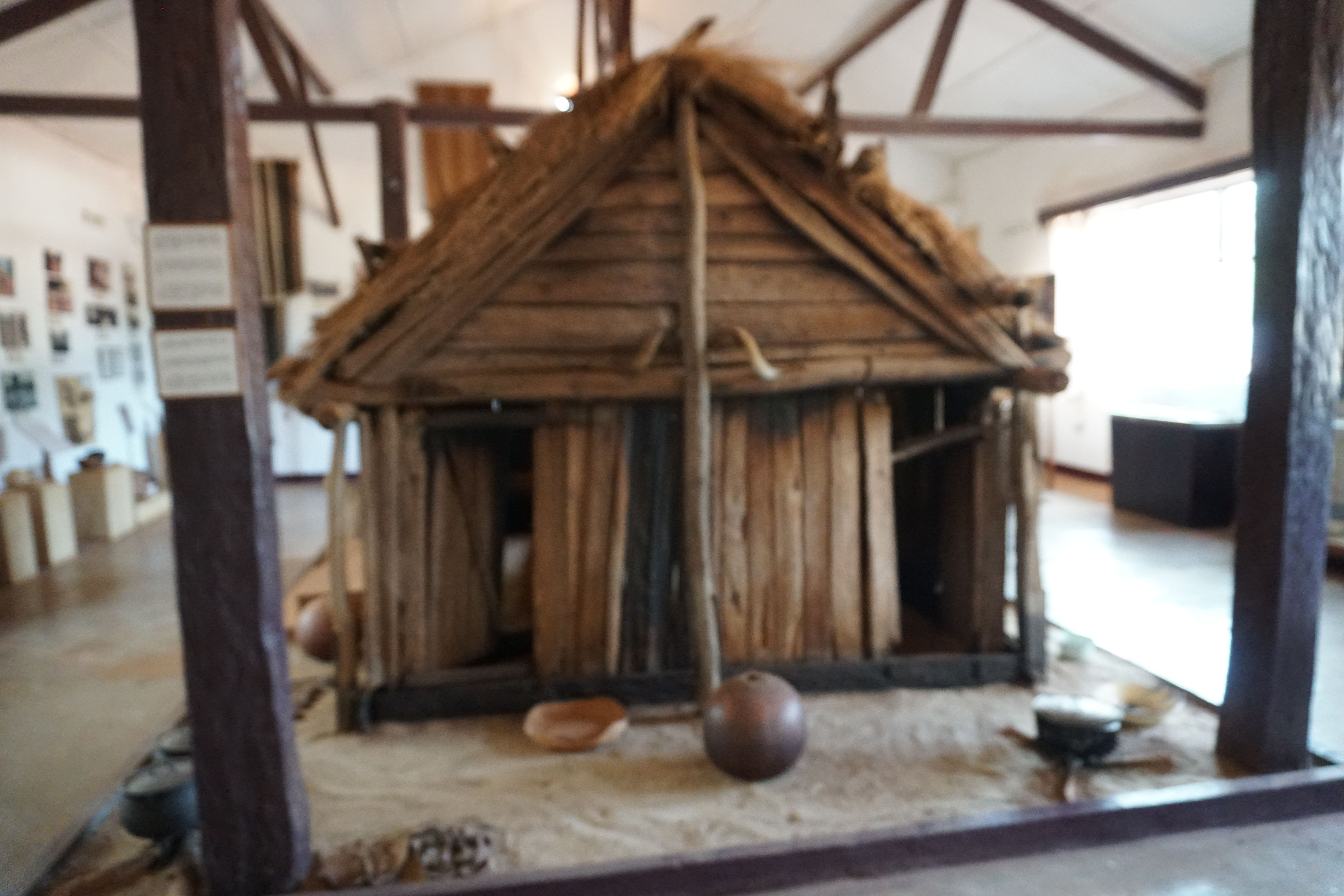 Basically their house is the size of our tool sheds. They have a couple reed mats they lay in a square, have a pot and a wash tub and a spoon, and then an area for a fire. That’s it. And all the people we saw on the way here- that’s all they have. These people guarding the plantation and the lemurs- that’s all they have. Although I imagine same may have a cell phone, it’s not many…but for the ones that do, this is still how they live. It is honestly, impossible to conceive of this as being their reality day in and out.

We saw quite a bit more about different cultures, ecological issues and conditions that had affected the people, many artifacts and handicrafts…but the place smelled weird. It smelled like pee and I thought goodness, do they just let the lemurs come in here and do whatever they want? But then we went upstairs.

The entire ceiling of the upstairs corner was squeaking and moving and there were thousands of bats up there! They had ruined the ceiling and many of the items around the area- the evidence of them was actually apparent downstairs too, where you can see the yucky mess coming through the ceiling and walls. I was sad that this nice museum was built to show off the culture of the people there, but then it was being ruined- and apparently not repaired- to boot.

I love bats, so I didn’t mind them- although the smell was horrible…however what I did bother me was this seemed insulting to the entire purpose of the museum, to have it being ruined like this. Maybe they have plans to fix it- but honestly it could have been like that for years…maybe they already fixed it once and still the bats came back? But the more likely reality is that they did the museum once and they probably aren’t going to do it again…

I hope not, but that’s kind of how things go it seems- they can quickly become a lost cause and you just move on in this really harsh, survivalist kind of society. Even though the museum was owned by people who could likely afford it, they probably have a similar, “well, that is that” kind of feeling too. I don’t know- but I do know sometimes I can relate: you can only do so much and then you must let it go.

We spent the night getting ready and me, trying to type up some of this…it’s hard to keep up actually because we are so busy doing stuff and running around, then I am usually napping or going to bed…but we got everything packed up and hoped the lemurs would meet us once more-…though as it’s not our regularly scheduled time, was this possible?

This was also when I noticed my legs had bright red spots on them. They were not itchy or hurting, but there were bumps all over. I could not imagine what it was, but Bryan said I was allergic to the lemurs- naturally, I could have punched him! How dare he even joke about such things…

He did say I was the dummy that went to the “spiny forest” with shorts on- and I should expect nothing less! He of course said it as a joke and trying to be funny, but I did have to punch him in the arm nonetheless.

What the heck made these bumps?