International flights are nice because they feed you well and give you little goodies. We flew Ethiopian Air and they gave us little pouches with a sleeping mask, little toothbrush and toothpaste- and bright yellow socks. I thought at the time, the socks were silly, but I realized later in the Ethiopia airport, how many people were actually barefoot- and they wanted you to not be so on the plane…so, while the effect was a bit lost on us at the time, it was really pretty practical- and I did use them a few times on the trip!

We flew through the night to Dublin- an almost 10-hour flight. Since we were flying toward the evening there, when we got to Ireland, it was night also and we never saw daylight. So we skipped Saturday and went to Sunday basically.

The flight was not super full and right when I was starting to get excited about claiming a row of 5 seats so we could lay down, someone else did and suddenly all the empty rows were all taken. The girl sitting with us had moved to a seat nearby that was a little more open, so we had 3 seats to share at least- then one of us could lay down with our head in the other’s lap.

I do not sleep on airplanes for more than a few minutes, then I am jolted back awake again- which goes on for hours. Sometimes I get a little antsy and feel like I just have to jump out of my seat because I can’t take it for even one more second…by the time we were getting close to Dublin, I could not wait to get off the plane, stretch my legs and most of all, get a coffee and use a clean bathroom. After all that time in the air, the seats and the bathrooms had been trashed…I could not imagine using them. I just wanted a fresh start.

The plane stopped and in her announcements, I thought I heard the flight attendant say something about staying on the plane, and I thought, “Who would want to do that!? Thank goodness, I’m not”! However when everyone that was getting off in Dublin got up- but so many others stayed seated- I started to worry. I even went to the attendant to ask and she told me we were NOT ALLOWED to leave!! What do you mean? We were only half way through- not getting off this plane meant 20 hours on the same plane, with no break?

I thought about getting angry and trying to do something about it so I could get off the plane…but I instantly realized this is a security issue, not just an inconvenience for us…there was going to be nothing but getting arrested that would come from getting upset- but I was crushed. No stretching my legs, no getting coffee- and sadly, no clean toilet, my biggest frustration.

Thankfully however a cleaning crew came in and did a bit of “light cleaning” as they said- awkwardly working around us…but how much easier would that have been to clean if we had been allowed to just get off and out of the way!? How much of a security issue is it really either, if you don’t leave the gate (thereby not needing to mess with customs or baggage). In all, their grand plan made no sense and annoyed the crap out of me.

We took day 2’s pic then since that was all we’d see of Ireland. 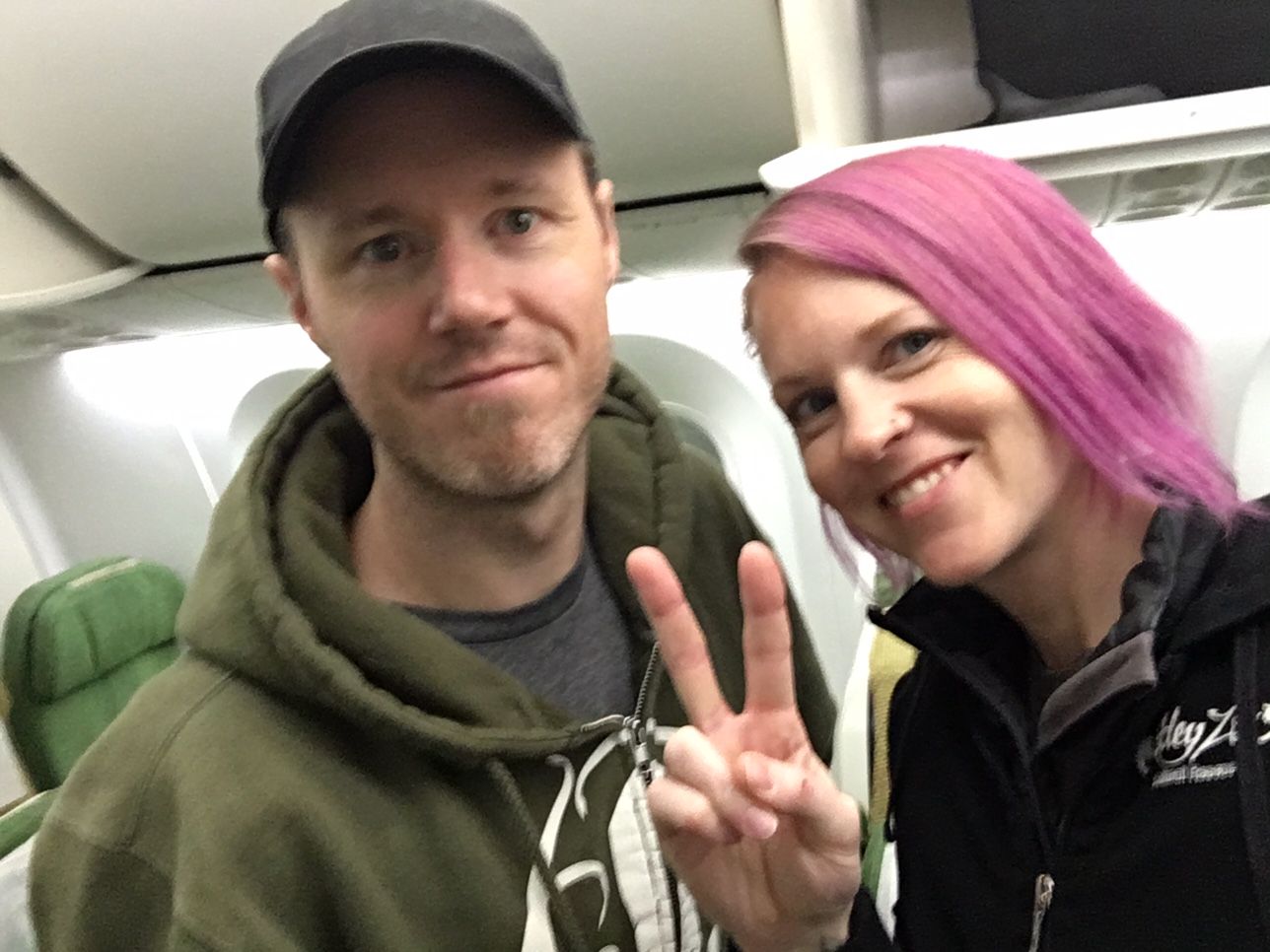 This is also where I made a fatal mistake: I left the phone on, connected and NOT in airplane mode…for 7 hours, all the way to Ethiopia! In Dublin, the data and texting were free- as well as South Africa- but nowhere else. I was told by tmobile not to use the phone at any time between…yikes! But now I have no idea how many times it tried to connect, or used data at an expensive rate- but I guess I will find out later. It’s better not to know now though, really…

When we landed in Ethiopia, it was very early morning and nothing was open. This airport is unusual in that it encourages people to sleep there- making lots of benches without armrests as well as chaise lounges- which were naturally, all full. After all that sitting anyway, Bryan and I decided to circle the airport just walking for a while to keep from feeling too yucky or antsy on the next ride.

The toilets were super busy and really freaking chaotic, but just as dirty and with no toilet paper. Thinking ahead, like a Girl Scout, I had brought some, though naturally I packed it in the checked luggage…so, it seemed there’d be little relief there either!

There were women everywhere- some washing their feet and whatever body parts they could fit into the sink, into it, splashing water everywhere. In another level of mystery, were the women brushing their teeth around this sink bathing (gag)- and leaving the water running. It just struck me as so ironic in Ethiopia of all places, people left the water running while brushing their teeth? This is the first world sin of sins- not Africa’s! Considering we always talk about waste by saying “there are starving children in Africa” (of which I instantly think, Ethiopia specifically), wasting water you’d think, would be unheard of here…

Waiting in line for the stall was another interesting experience- you really just have to push your way in there and just be faster than the ladies behind you. I missed my chance a few times, making the mistake that there was a line- especially as it seems there was an entry on the other side of the room, so women were vying for stalls from both ends. Rather than take turns, it was a free for all, so I just pushed my way as soon as I saw the stall open. It’s just how you have to be, because lines just don’t work that way here!

When we found the “ticketing gate”, which was a booth with 2 computers and those handy stanchions (not long enough to make a real line). Being “pushy” is really hard to do when you’re used to being courteous and cognizant of order- but when you need to, you have to just push in and block the way of anyone else trying to cut. People did cut us, but thankfully we were able to keep it from being too many of them and eventually we made it to the agents.

While the one started helping us, the other computer seemed to have an issue- so naturally our guy and the other two employees that had walked up, all stopped to peer over the broken computer. Four agents, two computers, nothing being done to get our tickets on the working computer…it was honestly comical. The agent was really nice once he got back to us, but totally threw us off asking how we liked Donald Trump as our president…

With boarding passes in hand, our anxieties were alleviated and we went to wait at the gate- which was a pretty sobering experience. The room was packed with people and every cough and sneeze, we flinched at. We were not wearing our masks yet, but were tempted to break them out- however all that time wearing them would have been pretty unbearable as it was quite hot and there was zero air flow. However, we decided that when we got to Madagascar, we would put them on going into the airport- since while neither of us wanted to be sick with anything, mostly we did not want to get the plague!

There were no seats left in the overcrowded gate; it was hot, we were tired. We couldn’t really hear which flights were being called, but we could see a monitor which helped us decipher the message. It seemed a long while before they called our flight, so we had time to get our pictures in Ethiopia- in front of a mural….because that was all we were going to see of it! 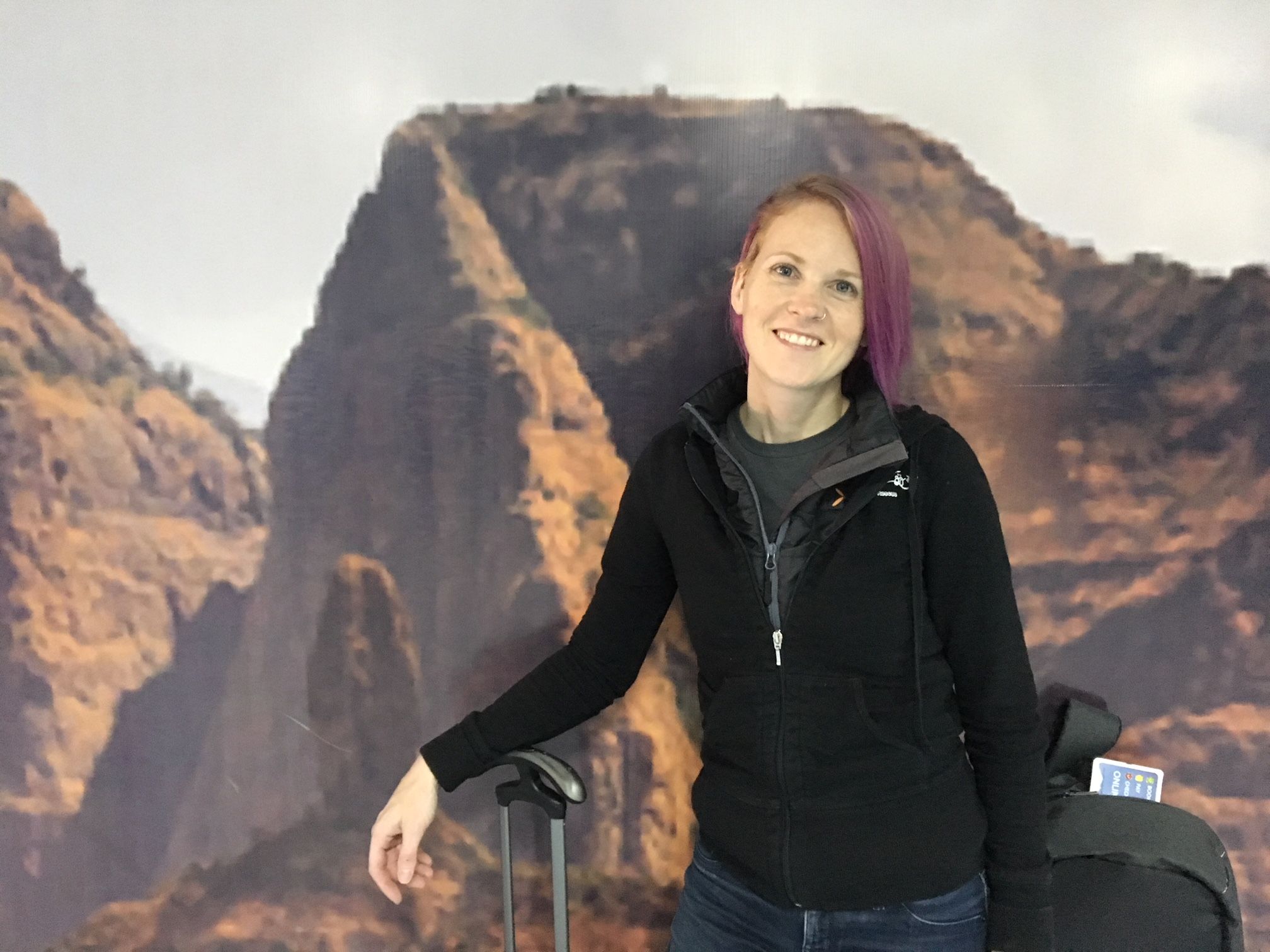 Finally, the wait was over and we were loaded onto the plane- Madagsacar was in our grasp!